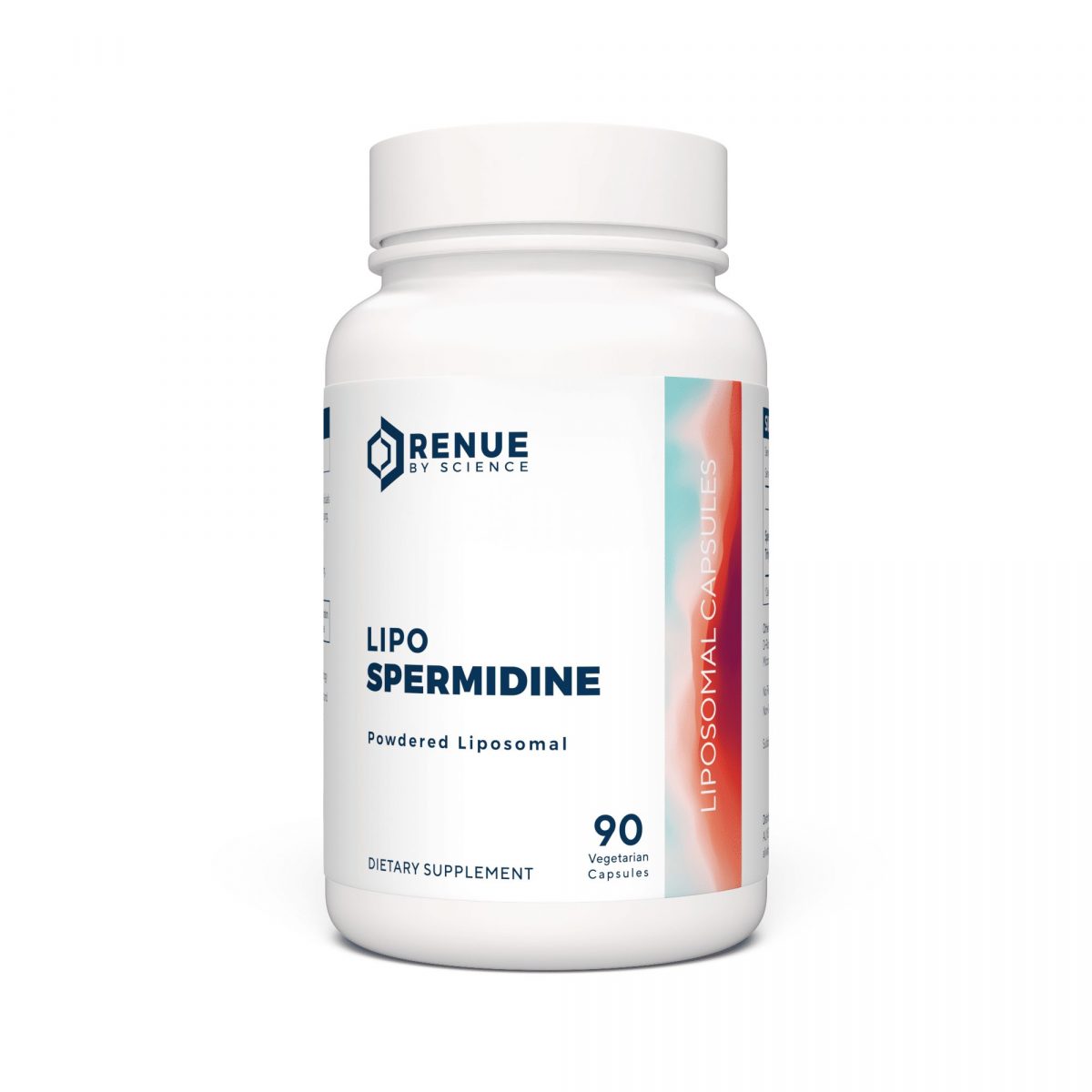 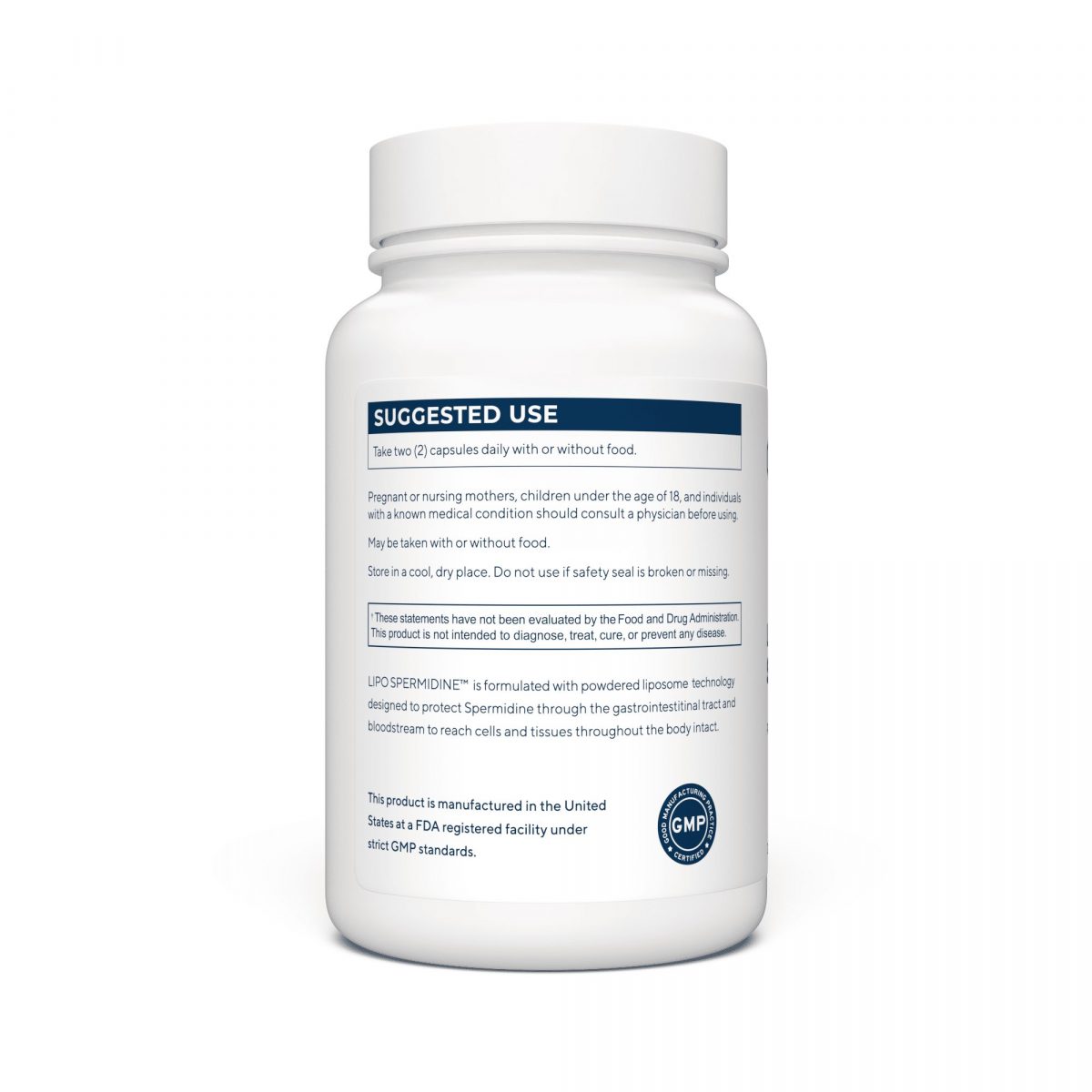 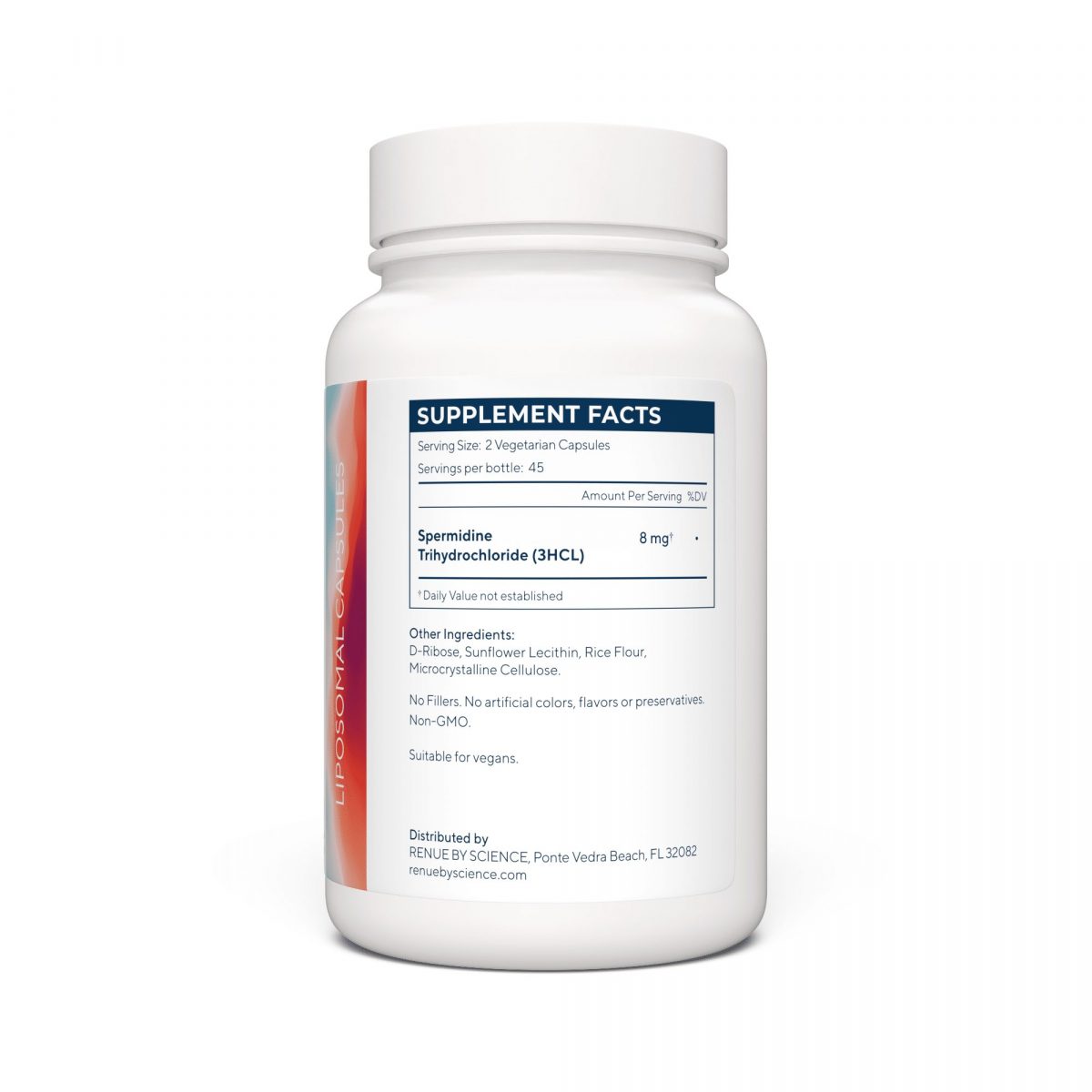 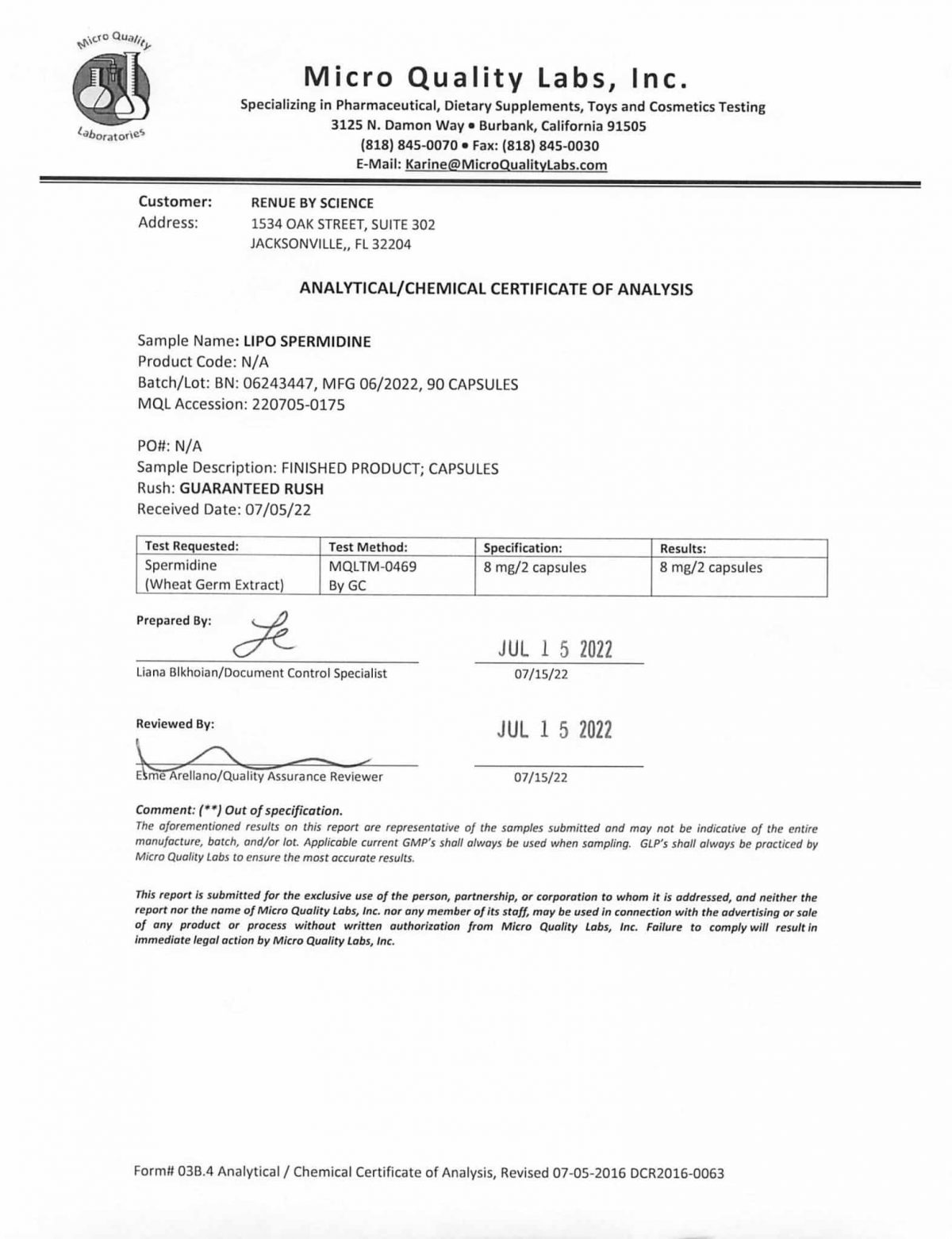 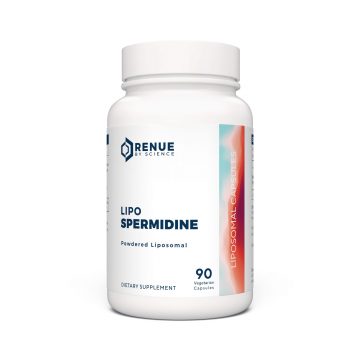 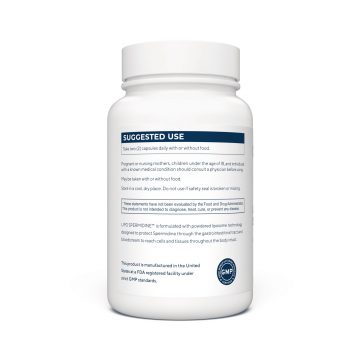 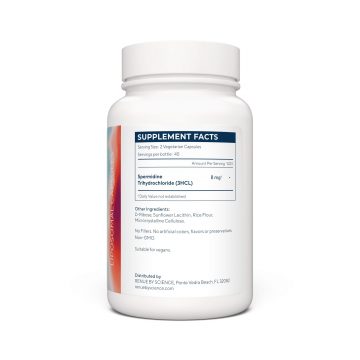 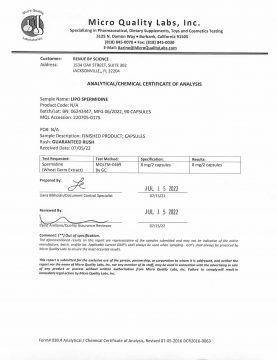 Our process encapsulates and delivers Spermidine intracellularly in its complete form where it can be absorbed and utilised rather than being destroyed in the stomach.

Spermidine has been studied for a range of health-protective effects that promote healthy ageing and longevity. In over 107 recent studies and counting, scientists have shed light on Spermidine’s powerful anti-ageing benefits.

Spermidine is a naturally occurring molecule that is vital to cell function and survival. It’s part of a group of molecules called polyamines. Declining polyamine levels are associated with inflammation-driven ageing.

“Changes in polyamine levels have been associated with ageing and diseases. Their levels decline continuously with age and polyamine (spermidine or high-polyamine diet) supplementation increases life span in model organisms.” ⑴

Spermidine’s main mechanism of action is its ability to induce autophagy, a self-preservation process which clears out toxic, damaged and dysfunctional cells, resulting in lower levels of inflammation in the body.

Normally, the process of autophagy is induced by an extended period of fasting. However, it can also be induced by compounds like Spermidine, which mimic the anti-ageing benefits of caloric restriction.

“A defective autophagy mechanism and a lack of spermidine are highly correlated with reduced life spans, chronic stress, and acute inflammation.” ⑵

Inflammation Is A Major Consumer of NAD+

Chronic inflammation is a risk factor for a wide range of age-related diseases and it’s a major consumer of NAD+. In order to restore your NAD+ pool, minimizing inflammation is vital.

When removing toxic proteins and damaged cells from the body, more energy is available for the regeneration of healthy cells and resulting in lowered inflammation.

“Aging has been characterized by a chronic inflammation profile that leads to chronic damage to cells and is associated with many age-associated diseases.” ⑶

According to Dr. David Sinclair, professor of genetics at Harvard and one of the leading longevity scientists, Spermidine can reduce disease and lower bioage by 5.7 years.

“Spermidine, a tiny molecule from wheat germ, protects the heart and extends the lifespan of mice, even when given mid-life. In people, increased consumption is associated with fewer diseases & a 5.7-year age reduction.” – David A. Sinclair ⑷

Although a powerful compound, Spermidine is well known for having poor bioavailability. Lipo Spermidine features our proprietary, powder-based liposomes that protect & carry the Spermidine into the bloodstream for increased absorption and targeted systemic delivery.

Many popular supplements have very poor bioavailability. Here we demonstrate how Liposomes protect ingredients through the GI tract. Liposomes overcome obstacles to cellular and tissue uptake—and improve the biodistribution of compounds to target sites.

Liposomes are a revolutionary way of encapsulating active ingredients to protect and deliver them directly to the cells of our tissues, which are reached via the bloodstream. 1 Liposomes stabilize therapeutic compounds—overcoming obstacles to cellular and tissue uptake—and improve the biodistribution of compounds to target sites.

Why Liposomes Are Needed

The aim of taking any supplement is to ensure its transport into the bloodstream via the mucosal and intestinal epithelial cells.However, due to low absorption and bioavailability rates of traditional oral dietary capsules, active ingredients lose most of their potency while passing through the gastrointestinal tract or are simply not absorbed in the small intestine at all. The majority is excreted unused via the intestines or kidneys. 2 Liposomes are vesicles comprised of phospholipids—the primary building blocks of cell membranes. Because they are made of the same material our cell membranes are made of, as they bond to these membranes, they facilitate the delivery of nutrients that are difficult for your body to absorb.

Liposomal delivery offers a targeted and complete absorption of active ingredients with a delayed‑release effect, unlike all other nutrient delivery methods. This increased circulation time of key nutrients in the bloodstream significantly bioavailability. The higher the bioavailability of an active substance, the more effect it has on the body. 3

Liposomes are absorbed through the oral mucosal lining and through lymphatic mechanisms in the gut, bypassing first pass metabolism and breakdown in the liver ensuring the retention of liposome integrity. A synthesis takes place which allows vitamins, minerals or micronutrients to be transported more easily. This higher absorption, means greater efficacy and with smaller doses needed to achieve better results. 4

Phospholipids, which are found throughout the body in the membranes of body cells, are so naturally-occurring, that the body recognizes these as body-compatible and does not treat them as ‘toxic’ or ‘foreign’—and, so, does not mount an immune attack on the liposome. 5

Liposomes shield nutrients from detection by the body’s immune system, mimicking biological membranes and giving the active ingredients more time to reach their intended destination. Phospholipids mask the active ingredients so that larger amounts can be absorbed and escape the selective function of the small intestine. Osmotic (hydrophilic) side effects of some high-dose vitamins and minerals can thus be reduced. 6

Liposomes have demonstrated the ability to cross this barrier, giving the liposomes the ability to deposit the supplement directly into the cells and enhance circulation of nutrients by your lymphatic system. 7

This profound effect of liposome size on complement recognition can also affect liver uptake. Generally, large unmodified liposomes are eliminated more rapidly than small liposomes, which is why our Fluidizing Liposomes™ are very small—less than 100 nm to prevent their uptake by macrophages of the liver and the spleen. 8

What are Liposomes made of?

The word liposome comes from the Greek words ‘lipo’ for fat and ‘soma’ for body. Liposomes are spherical ‘sacs’ consisting of a double ring of fatty-acid molecules—phosphatidylcholine molecules (phospholipid attached to a choline particle).The liposomal spherical ‘sac’ can be used to enclose and deliver contents of the ‘sac’ directly into the cells and body tissues.The phospholipid molecule consists of a hydrophilic phosphate head and two hydrophobic fatty acid tails. This enables liposomes to be carriers of both hydrophobic and hydrophilic compounds. Liposomes are lipid vesicles made of phospholipids strung together, which form a double membrane, just like almost all cell membranes of our body.The encapsulation of hydrophilic or hydrophobic nutrients within liposomes, such as NMN, allows the active ingredient to bypass the destructive elements of the gastric system. improved its oral bioavailability and increase peak plasma concentration. 9

What does phosphatidylcholine do?

Phosphatidyl­choline is required for many vital functions in the cardiovascular, reproductive, immune, and nervous systems. PC and its components are needed for the synthesis of important messenger molecules called prostaglandins which, among other functions, regulate the contraction and relaxation of muscles. Choline is required for the synthesis of intracellular messenger molecules including the neurotransmitters that allow nerve cells to communicate with muscles and each other, and are essential for proper heart and brain function. At birth up to 90% of cellular membranes are made up of PC. As you age, the percentage of PC in your cellular membranes can decrease to about 10%. This fact leads many to recommend consistent supplementation with this essential phospholipid. 10

How do Liposomes work?

Liposomes release bioactive nutrients by membrane fusion. They delay the clearance and increase the intravascular circulation time of encapsulated nutrients and prolonging retention time. At the first stage of liposome-cell interaction, liposomes adhere to the cell surface. Following such binding, the liposome is internalized into the cell by the mechanism of endocytosis (or phagocytosis). This is followed by the enzymatic digestion of the liposome in the intracellular compartment, accompanied by the intracellular distribution. The active nutrient encapsulated in the liposome is protected from metabolism and the molecule becomes active only after release from liposome. These encapsulating phospholipids bond with cell membranes to facilitate intracellular delivery. They are successful in this because they are able to bypass the digestive processes that normally degrade foreign substances. Liposomes ensure safe delivery of encapsulated cargo retain it in tissues and cells.

1. Potential of Liposomes for Enhancement of Oral Drug Absorption 2. Nanocarriers for oral drug delivery 3. Composition design and medical application of liposomes 4. Liposomal Delivery Systems: Design Optimization and Current Applications 5. Oral Bioavailability: Issues and Solutions via Nanoformulations 6. Spontaneous In Situ Formation of Liposomes from Inert Porous Microparticles for Oral Drug Delivery 7. Stabilization of liposomes during drying 8. Powdered lipid nano and microparticles: production and applications. Lipid nanoparticles as vehicles for macromolecules: nucleic acids and peptides 9. Scalable solvent-free production of liposomes 10. Membrane lipids: where they are and how they behave

Research on Liposomes for Increased Bioavailability

Liposomes, vesicles enclosed by phospholipid bilayers, can solubilize water-insoluble drugs into the lipid domain of the liposomal membrane. In addition to their solubilizing capacity and biocompatibility, the structural and compositional similarity of liposomes with bio-membranes has also encouraged their application for non-invasive oral delivery of poorly-permeable nutrients. 2

Liposomes are non-toxic, biocompatible, biodegradable, and have the following advantages as carriers in drug delivery: first, liposomes can reduce toxicity; second, hydrophilic and lipophilic agents can be incorporated into liposomes; third, liposomes control the drug release; and fourth, the liposome delivery system increases bioavailability. 3


Molecules with very poor water solubility usually have the worst bioavailability and can benefit the most from liposomal delivery. Fisetin is one example shown below up to 27x more bioavailable.

For best results, take two (2) capsules daily with water as a dietary supplement.

For other countries, please use https://nadlab.uk/.

Once ordered and payment is received, we will dispatch your item(s) within four working days from a European distribution centre. You will receive an email with your tracking information.

We offer a 30-day Money Back Satisfaction Guarantee from the date you received the product. Please read the terms and conditions below. We guarantee your satisfaction and will:

Return Procedures: Please email info@nadlab-eu.com with your complete name, address, phone # and order #. Once we receive this email, we will provide you with a return authorisation number and address. Please then return the package to us.

NOTE: The customer is responsible for all delivery charges when sending the product back to us.